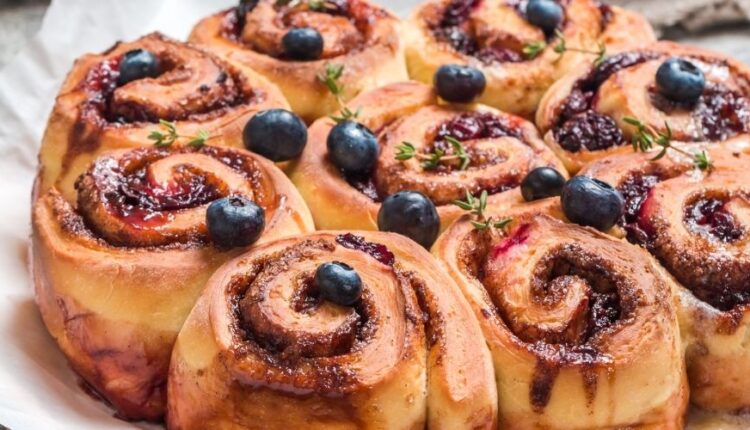 The best Vegan Blueberry Cinnamon Rolls for a perfect breakfast, snack, or a coffee accompaniment. These blueberry rolls are soft, fluffy, and so delicious. If you are a blueberry lover, then I’m sure you will fall in love with this recipe.

These cinnamon rolls are a popular snack in Northern Europe, such as Denmark – (Kanelsnegle) and Sweden – (Kanelbullar). I found these delicious cinnamon rolls in gas stations and coffee shops. But they weren’t selling vegan options, so I thought to give it a try at home, and I loved how it turned out these homemade vegan blueberry cinnamon rolls. The blueberry filling version is so delicious and totally worth spending some time making it.

This vegan blueberry cinnamon rolls recipe is easy, and it can be made by anyone without much struggle.

Try Some Other Vegan Blueberry Recipes

How to Make A Perfect Vegan Dough for Cinnamon Rolls

For this recipe, you will need dry instant yeast. This type of yeast works instantly, but liquids should be warm to get better results.

Making this dough is simple because you just need to toss all the ingredients in a large mixing bowl and knead until it turns into a soft and elastic but not sticky dough.

Cover your dough with a wet kitchen towel and let it rest in a warm spot for 1 hour or until it has doubled its size.

Rolling the dough into sushi or a Swiss roll-like shape can be done by anyone literally! Dust your working surface with some flour and roll the dough into a rectangular shape.

Spread the blueberry sauce and sprinkle some whole blueberries on top.

Grab the longer edge and start rolling as tight as possible into a sushi-like shape. Cut into rolls with a sharp knife or with unflavored dental floss. Just make sure you don’t cut them into big pieces. Now that I’ve summarized the process! Let’s jump into our recipe for vegan blueberry cinnamon rolls!

– Pinch of salt (if needed)

1. For the dough: Add all the ingredients in a large mixing bowl and mix until fully combined. Use your hands and knead until the dough is soft and elastic. If the dough feels sticky, add some more flour and knead again, and more milk if too dry.

2. Cover the bowl with a damp towel and let it rise for around 1 hour or until it has doubled in size.

3. Meanwhile, make the filling: Add (175g – 1 cup) blueberries in a small pot, powdered sugar/ or maple syrup. Crush the blueberries into a puree with an immersion blender and leave some whole pieces in there.

4. Boil the mixture for 5-8 minutes or until it looks like a thick sauce. Put it aside and let it cool down before using it.

5. After the dough has doubled its size. Dust with some flour on your work surface and start rolling the dough into a rectangular shape. Start spreading your cooled blueberry sauce and sprinkle on top the rest of the blueberries you saved for later.

6. Take the longer edge of the rectangle and start rolling as start as possible. Using a sharp knife, cut the rolls and transfer them into a greased baking pan. Leave some space between each cinnamon roll.

7. Cover and let it rest again for another hour.

8. Preheat the oven at 180°C. Transfer the vegan blueberry cinnamon rolls into the preheated oven and bake for 15-20 minutes.

9. Test the center with a skewer. If it comes out with raw dough, then leave it some more time.

10. Taste better when served fresh, but it can be stored in an airtight container, at room temperature for 1-2 days, or in the fridge for 1 week. Reheat the vegan blueberry cinnamon rolls in the microwave. 2