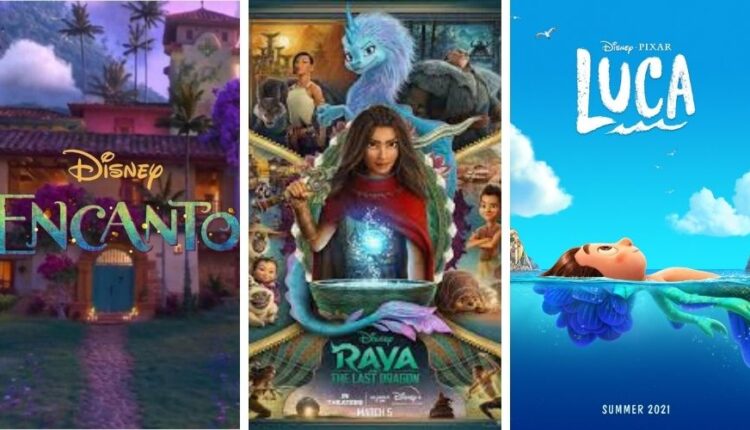 We love to watch a funny animation movie at the cinema after a long tiring week! Who doesn’t?! If you are into animated movies, then you must check out these top 5 upcoming animated movies 2021.

I and my team we’re animation movie enthusiasts. Since COVID-19 hit us, we couldn’t enjoy watching a nice movie in a theatre. But the big studios started releasing the good stuff, and we are LOVING IT! Check out below the upcoming animated movies 2021.

1. Raya and The Last Dragon  – Released on 5 March

Raya and the Last Dragon is an animation movie produced by Disney. In ancient times, Kumandra was a place where people and dragons used to live in harmony.

When the sinister monsters called Druun started to attack their precious land, the dragons made the ultimate sacrifice, themselves! It’s a must-watch animation movie!

Now with the teaser dropped, we could take a look at the newest Pixar original animate movie. The information is limited, but we already know some key pieces of information, the movie is going to be released on June 18.

This movie is about family, friendship, and of course comedy. It stands at #2 in upcoming animated movies 2021.

So excited about this one! We have already watched all 3 previous parts and it’s amazing. We found out that it’s going to be released on the big screens on 6 August in the USA.

Unfortunately, we could not find any information about it. I guess we’ll just have to wait for the movie to be released. Successfully occupied #3 place in our top with upcoming animated movies 2021.

4. Earwig and The Witch – Released on 5 February

An orphan little girl, called Earwig, is adopted by a witch. Earwig’s new home is a house filled with magic, mystery, and spooky stuff.

Encanto is an upcoming animated musical fantasy movie produced by Disney. It is scheduled for November 24. This is the tale of a family, who lived hidden somewhere in the mountains, in a charming place they call Encanto.

The magic of the place blessed every kid in their family with superpowers to heal, all but one Mirabel. She ends up being the hero of this story. It stands at #5 in upcoming animated movies 2021.