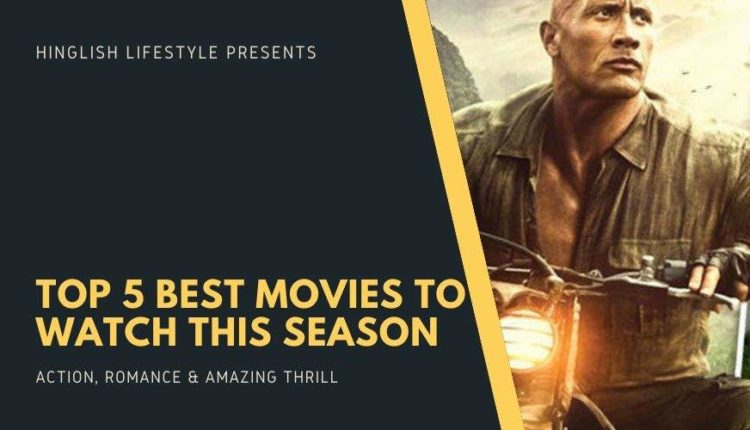 We have prepared a chronological list of the top 5 best movies to watch in the theaters this winter. Our list includes movies for all „tastes”, from action to comedy, horror, and fantasy.

Top 5 Best Movies to Watch in The Movie Theaters

1. Jumanji: The Next Level

Jack Black, Kevin Hart, Dwayne Johnson, Karen Gillan are sucked again in the most dangerous game in the world, and Awkwafina, Danny DeVito and Danny Glover are also part of the cast. But, this time the game is completely changed. While they try to save Spencer, Jumanji takes them through arid deserts, snow-capped mountains, and extremely dangerous places. We can certainly say that it will be an unforgettable movie and one of the top 5 best movies to watch.

Helen Mirren and Ian McKellen play the lead roles in this drama and is one of the top 5 best movies to watch this winter. Roy Courtnay (McKellen) is a crook who found his next target, Betty McLeish (Mirren), a widow who just inherited millions of dollars, but what should have been just a lightweight scam turns into a game of mice and cats.

3. Star Wars: The Rise of Skywalker

What you need to know is that we’re not just talking about another Star Wars movie. No, it’s more than that. It is the last of the original Star Wars story, the end of what is known as the Skywalker Saga. We are convinced that fans are more than eager to see it in the theaters, especially since the cast includes all the actors loved by the fans of the franchise, including Carrie Fisher, Mark Hamill, Adam Driver, Daisy Ridley, John Boyega, Oscar Isaac, Anthony Daniels, Naomi Ackie, Domhnall Gleeson, Richard E. Grant, Lupita Nyongo, Keri Russell, Joonas Suotamo, Kelly Marie Tran, along with Ian McDiarmid and Billy Dee Williams. It is one of the best movies to watch this winter.

Horror movie enthusiasts are eagerly awaiting this movie in which Andrea Riseborough plays the lead role. She is the detective Muldoon, who must investigate and solve an earthquake case, and the case of a young mother who killed her entire family in her own home. However, the detective will discover that the house where the crimes took place is cursed and anyone who enters it is in great danger. Grude comes in at #4 among the top 5 best movies to watch.

The film is starred by Margot Robbie, Charlize Theron, and Nicole Kidman and is based on real events, one of the biggest scandals in the American press. Theron and Kidman bring Megyn Kelly and Gretchen Carlson, two of Fox News’ best-known television stars, to the big screen, while Margot Robbie is the fictional producer Kayla Pospisil. All three decide to confront Roger Ailes, who maintained a hostile atmosphere for women in Fox News offices and was later sued by several employees for sexual harassment. It stands at the fifth among the top 5 best movies to watch.

Raspberry Chia Pudding: A Quick & Healthy Snack You Must Try