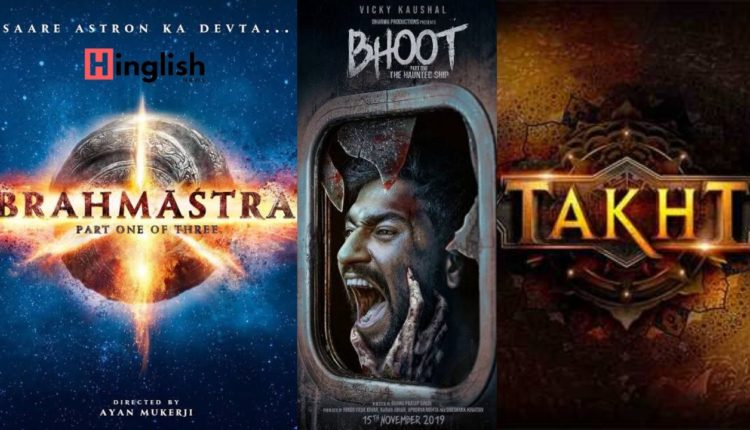 2019 has not been what the Bollywood industry was expecting. Most of the superstar movies were a big flop including Shah Rukh Khan’s Zero. But it seems that 2020 has quite an interesting list of Bollywood Movies that will surely grab people’s attention. We have put together the list of top 10 best Bollywood movies 2020 along with their release date and cast. So, without any further ado, let’s get started.

Tanhaji was the military leader in Chhatrapati Shivaji’s army. In this movie, Kajol and Ajay Devgn are reuniting on the screen after a long time. The story revolves around the brave actions of Tanhaji: An Unsung Warrior. Said to be released on January 10, 2020, this is one of the most anticipated movies. It will be released in 2D as well as 3D. Apart from Kajol and Ajay, Saif Ali Khan is playing the role of Uday Bhan – the Mughal commander. Tanhaji film gets the first position among the list of top 10 best Bollywood movies 2020.

Vicky Kaushal is undoubtedly one of the most talented Bollywood actors. His acting in URI – the Surgical Strike paid back with applauds as well as awards. Now, the actor is going to play in “Bhoot Part 1 – the Haunted Ship” along with Bhumi Padnekar in this horror-cum-thriller film. Said to be released on February 21, the movie is expected to do well in the box office. So, let’s wait and watch whether it will win the public’s heart. Bhoot Part 1 gets the second position on the list of top 10 best Bollywood movies 2020.

3. The True Story of Gunjan Saxena – The Kargil Girl

Kargil War was the most heartbreaking moment for many Indians. Many parents lost their brave sons and daughters in this war. However, as usual, our brave heroes defeated Pakistan and once again slapped the opponent with the victory. While many unsung heroes have given their sacrifice to save our motherland, Gunjan Saxena’s story is slightly different. The True Story of Gunjan Saxena – The Kargil Girl is set to be released on March 13, 2020. Janhvi Kapoor will play the role of Gunjan Saxena – the very first Indian Air Force woman officer who went to war. This movie gets the third spot among other top 10 best Bollywood movies 2020.

Tiger Shroff’s Baaghi has been a good hit on the Bollywood’s box office. The previous two parts of this movie have given the actor great fame as well as many awards. Now, the third part of this movie called Baaghi 3 is all set to be released on March 6, 2020. While his previous movie WAR didn’t do well on the box office, Tiger might be expecting this one to break some records. Along with Tiger are Riteish Deshmukh and Shraddha Kapoor in this action-cum-thriller film. We have put Baaghi 3 at the fourth spot on our list of top 10 best Bollywood movies 2020.

It was 1983 when India lifted its very first Cricket World Cup. The team was led by Kapil Dev to the historic win. Now, depicting the same, Ranveer Singh and Deepika Padukone will play their roles in ’83 – the film. Ranveer will play Kapil Dev whereas Deepika’s role is still unknown. Anyway, the film is said to be released on April 10, 2020. So, all the cricket fans, get ready to be thrilled and get the chance of reliving the 1983’s Cricket World Cup. Ranveer Singh’s starring ’83 gets the fifth place among other top 10 best Bollywood movies 2020.

Govinda’s original Coolie No. 1 film was fun as well as one of the decades’ biggest hits. Govinda and Karishma Kapoor successfully entertained millions of people in this comedy centric film. Now, the sequel of this movie is all set to be released on May 1, 2020. In this comedy film, we will see Varun Dhawan and Sara Ali Khan together. For unawares, Varun has already done Judwa 2 which was the sequel of Salman Khan’s Judwa. People liked Judwa 2 and now is the time for Coolie. What do you think? Will it be a hit? Coolie No. 1 occupies the sixth position on our list of top 10 best Bollywood movies 2020.

Ek number #COOLIENO1 🥇🍉🍉🍉. David Dhawan’s 45th film and my first film with Vashu sir who I have known since Iv been a small kid so this is a big deal for me . Thank u to my fans for always supporting me and the haters for encouraging me. Aap sabko Eid Mubarak

This is one of those movies I am waiting desperately for. In this mythological superhero movie, we are going to see the story of Brahamstra – the greatest of all weapons known by mankind, at least in stories. Alia Bhatt and Ranbir Kapoor are playing their roles along with Amitabh Bachchan. Ayaan Mukherji’s Brahmastra will be released in three parts which pretty much tells us that the director is focusing on every little detail to make the movie more appealing to the audience. The initial release was set on Christmas 2019 however, it was rescheduled for May 2020. We have placed it at seventh place on the list of top 10 best Bollywood movies 2020.

Shamshera was one of the most notorious dacoits in the 1800s. The movie is a biopic of his life and is all set to release on July 31, 2020. Vani Kapoor, Sanjay Dutt, and Ranbir Kapoor are playing lead roles in this adventure-cum-action Bollywood film. Since we don’t have many details about this movie, all we can do is wait for the official trailer. Shamshera gets the eighth place on the list of top 10 best Bollywood movies 2020.

The original Bhool Bhulaiyaa was a superhit on Bollywood’s box office. Akshay Kumar played the role of the psychiatrist in this comedy-cum-horror film. Now, the sequel of this movie called Bhool Bhualiyaa 2 is all set to be released on July 31, 2020. However, Akshay Kumar is replaced by Kartik Aaryan. Directed by Anees Bazmee, it is also one of the most awaited movies of 2020. We have put it on the ninth place amid the top 10 best Bollywood movies 2020.

Being shot under Dharma Productions’ banner, Takht is one of the most awaited Bollywood movies of 2020. It is directed by Karan Johar and will have many stars including Vicky Kaushal, Bhumi Pednekar, Janhvi Kapoor, Anil Kapoor, Alia Bhatt, Ranveer Singh, and Kareena Kapoor Khan. The multi-starer movie has no official release date as of now however, it will be released this year. We have put Takht on the tenth place amongst the top 10 best Bollywood movies 2020.

There you have it all, people. It was the list of most awaited movies in Bollywood 2020. Which one of them you are waiting for? Don’t forget to tell us in the comment section below.

Alaukik Rajpoot Jan 22, 2020
Oppo Reno 3 Pro has been in the leaks since a long time. Many leaks and reports have been talking about this…
Gadgets