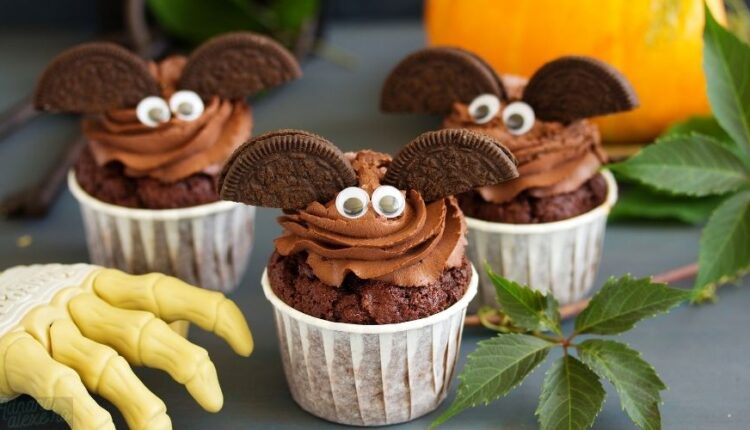 These vegan chocolate cupcakes are fluffy, moist, and topped with a delicious vegan chocolate ganache and Oreo biscuits. Transform your dessert into mini bats for Halloween this year. This post is available in the Romanian language. 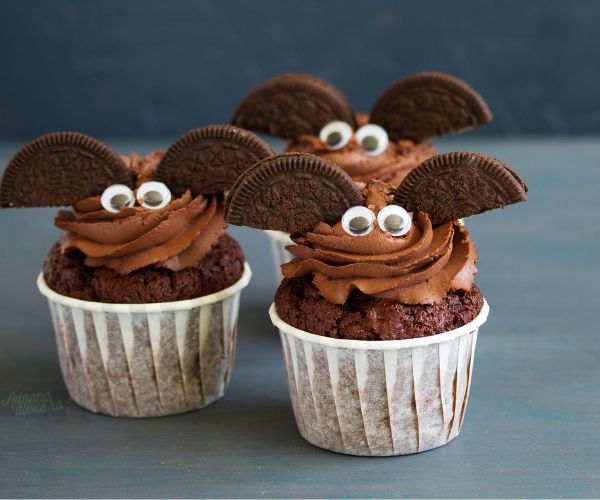 We love this vegan chocolate cupcakes because they are so spongy and delicious. We topped it with chocolate ganache and created a bat design by using Oreo cookies, and it looks so stinkin’ cute!

We are not bragging about this recipe too much, but we’ve tested several vegan recipes, and this one came out deliciously. You should also give it a try!

How to Make Vegan Chocolate Cupcakes

For the vegan chocolate ganache, you’ll be needing an electric mixer. Make sure you prepare the ganache first and allow it to cool down for 2 hours in the refrigerator.

Making the cupcake mixture is simple because you need to sift all the dry ingredients in a mixing bowl, add the wet ingredients, and whisk it until there are no big lumps left.

Place parchment cupcakes liners in a cupcake tray and divide the batter equally in each hole. Bake for 25 minutes and then let it cool down completely before filling with ganache.

To make the bat, cut Oreos in half and then place them on each side of the cupcake. To make the eyes, you can use edible candy eyeballs.

Don’t overmix: Mix until big lumps are dissolved and all the ingredients are fully combined.

Measure your flour: To lower the chances of failure, measure the flour using a kitchen scale or add the flour by spoon in the measuring cup and then level it with a knife.

Measure the other ingredients too: If you are a becoming chef then measure the sugar and cocoa as well. It’s not a crucial step but we want you to get no-fail vegan chocolate cupcakes.

Now that we have summarized this recipe a bit, let’s jump into our recipe. Any questions related to this recipe leave them in the comment section below.

How to make the best vegan chocolate cupcakes recipe this Halloween.

1. Make the chocolate ganache: Add the chocolate to a medium bowl. Take the coconut cream or scoop out the white separated part from a coconut milk can. Transfer into a microwavable bowl or a small pan.

2. Microwave the coconut milk for 1 minute or over a gas stove until hot, do not boil. You can do the same thing over low-flame but make sure not to boil it.

3. Pour the warm coconut cream over the chocolate and let it sit for 1-2 minutes. Do not stir yet. After 1-2 minutes, mix well with a whisk until chocolate is completely melted. Refrigerate for 2 hours before use. Use an electric mixer if needed. For a runnier consistency, microwave it for 30 seconds.

4. To make the vegan chocolate cupcakes: Preheat the oven at (180°C), and line a baking tray with cupcake liners or parchment paper.

5. Sift the flour and cocoa into a mixing bowl, then add the sugar, baking soda, and salt. Mix it well.

6. Add plant-based milk, vanilla extract, oil, vinegar, and apple sauce. Mix it with a whisk until there are no big lumps left. Be careful and do not overmix!

7. Distribute the mixture equally in each hole and bake it for 25 minutes. Test it with a toothpick in the center. When done, it should come out clean.

8. Let it cool down completely on a grill, and then fill the vegan chocolate cupcakes with the chocolate ganache. Cut Oreos in half and make the mini bats. Enjoy!

Radhika Nov 26, 2021
Papa Drac and his funny monster buddies are returning in a way you have never seen them before! In the new animated…
Food