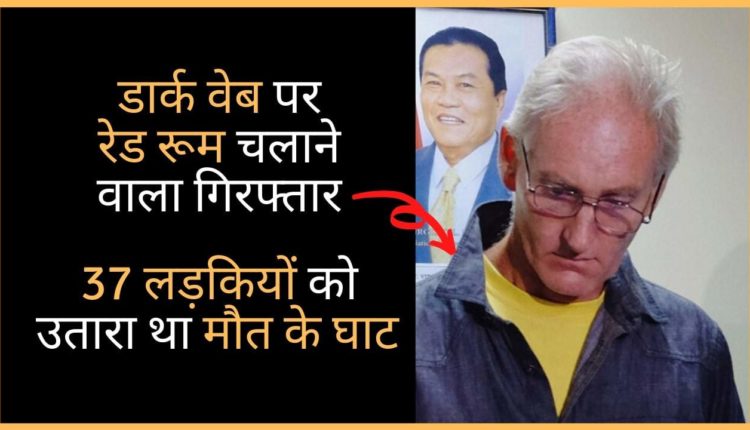 The Philippines police presented a man in court (on 23 September 2016) alleging that he not only sexually abused dozens of young girls, but also tortured them in other ways, as well as telecast them live. The 53-year-old man is named Peter Scully and is the first person to have a direct connection to the Red Room of the Dark Web. Before this, the Red Room of the Dark Web was just a rumor.

In today’s video, I will tell you about this incident and all the incidents related to it. So stay tuned by the end of this video, because in this video you will know what the red room is and what people do here. Watch it below:

What is Red Room of the Dark Web?

Red Room is a place (a room) where a person is kept to torture in different ways and eventually kill. This event usually takes place to a hidden location and entire torture or killing is broadcasted live on the dark web.

Who Runs the Red Room on the Dark Web?

Now we come to the man who was arrested. Peter Scully is a 53-year-old man with two children of his own. Now think about this, how a human being can be. In today’s world, no one can be trusted. Especially people living in the city should be smarter. People living in these skyscrapers do not even know who lives in the flat next to them.

Well, Peter Scully used to run a child pornography website called “No Limits Fun” on which he used to sell videos of sexual exploitation of young girls and other inhumane incidents at expensive prices. To see such videos on this website, pedophiles were willing to pay up to $ 10,000.

If you do not know who is called pedophile, then listen – people who like to watch or do child pornography or videos of sexual exploitation of children are called pedophils.

Well, the most terrible video of Peter was the one that the police themselves were hesitant to watch. It was something like this. In this video, Peter had stripped the little girl naked and hung her upside down and was doing a lot of dirty shit with her. Not only this, he used different types of sex toys and also beaten the child brutally. Apart from all this, the most surprising thing was that Peter’s girlfriend was also supporting him in this video.

Also Read: What Happens on the Dark Web is Inhuman!

Peter also kidnapped the two sisters of this girl, in which one somehow escaped and left the place and asked for help. Because of which people gathered there and called the police. After which the police arrested Peter and his girlfriends with red hands and saved the little girl who was just about to die.

When the police investigated and interrogated Peter, he fell under his feet. Actually this was not Peter’s first misdeed. Earlier, he had done dozens of works like this. When Peter was asked about everything, a dark web story came out that turned the Red Room from rumor to reality.

Peter said that there are many websites on which such works are done, but it is related to only two websites. One is his own and the other website is named “Hurt 2 – The Core”. When the police searched this website named Hurt 2, it was found out that about 15,000 such videos are uploaded every day.

What Peter did in his video, there was nothing in front of these new videos. Hurt 2 website had such disgusting videos in which humans were eating and eating the meat of live girls. Just imagine that if someone eats your own meat in front of you, how will you feel at that time.

The police did one day and night to trace and close this website, nothing was left to them except despair. As it is almost impossible to trace the dark web, the police could not close this website. But the police are still behind some people associated with Peter who can be related to the Red Room.

Another video of Peter being caught by the police in which he beat a baby girl badly and was forced to dig his own grave. When the girl dug up the grave, Peter buried the girl in the same grave. This tomb was built by Peter in the basement of one of his rented houses, which was later dug by the police and recovered the bones of that anonymous girl from it.

Well, a total of 75 cases have been filed on Peter Scully, which means that even if there were 2 to 2 cases in a Victim, it has done something wrong with 37 girls.

So if you also thought that the Red Room was just a rumor, then maybe now your thoughts have changed. And you should not think that this happens only in foreign countries, indecent act with children is not a new thing in our India.