From Rani to Maharani, Sony Liv's Latest is Binge-worthy 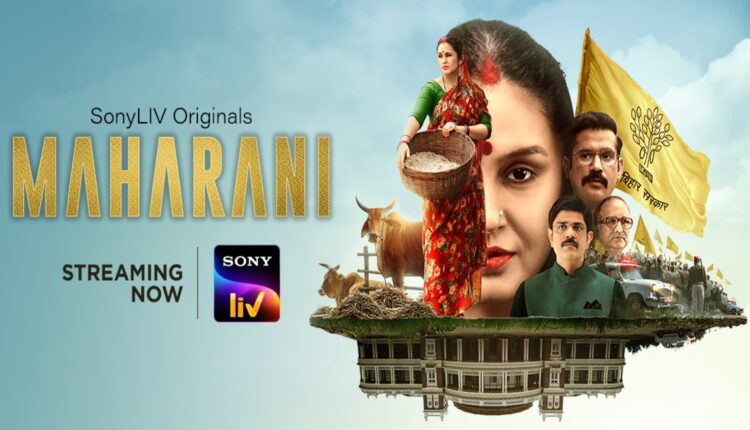 *Post contains Maharani spoilers. Please proceed if you have seen all the 10 episodes*

A couple of days ago, I was unsure about my Sony Liv subscription and was wondering whether it will be useful before the UEFA Euros. Thankfully for me, and many others, Maharani filled the gap perfectly.

After the success of Scam 1992: The Harshad Mehta Story, Maharani will take you deep into Bihar, not in 2021, in the early 90s. A state, which has been aptly portrayed and called a circus – for reasons the show has explored in its 10 episode-long venture. 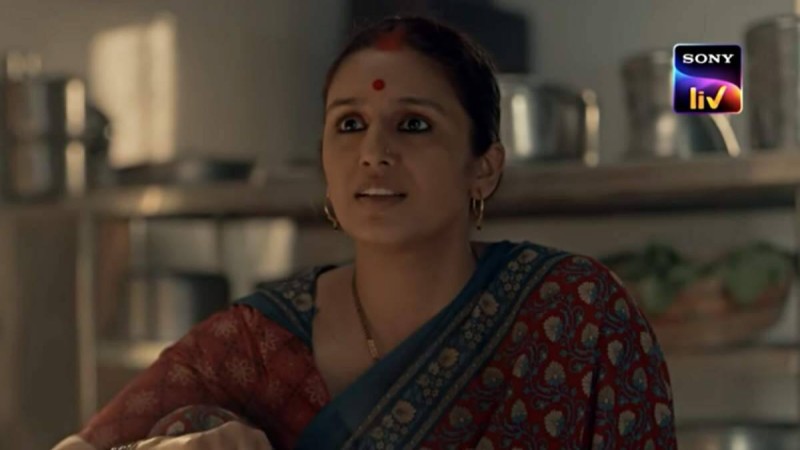 Starring Huma Qureshi (as Rani Bharti) as the protagonist, the show’s casting has been impeccable, with the likes of Amit Sial (Navin Kumar), Sohum Shah (Bheema Bharti), Vineet Kumar, and Pramod Pathak essaying key political figures in the show that’s set in the late 90s.

Essentially a political drama, Maharani brings Rani Bharti (a homemaker and wife to CM Bheema Bharti) at the forefront when her husband is shot and his government is leaning towards a no-confidence motion in the parliament. 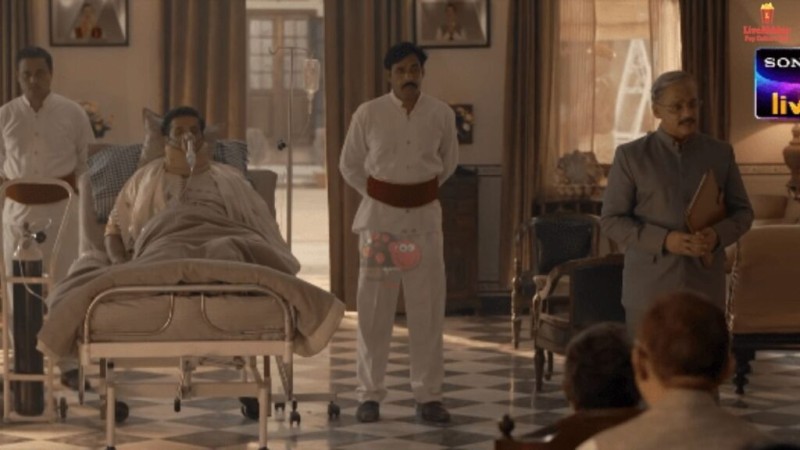 Bheema, a CM from the lower-caste, is surrounded by opportunist politicians (some from his own party, some from outside) and is incapable of leading the fight to the opposition, thus making him choose Rani as a puppet CM.

Things change when Rani, just out of her cowshed and kitchen, is humiliated for being an illiterate representative and is looked down upon as someone who is just ‘technically’ filling the empty chair.

Navin Kumar (a CM aspirant and a renowned party leader – played by Amit Sial) is on the other end trying to disrupt Rani’s new government and bring down Bheema Bharti’s unstable government.

There is also an entire movement of the right-wing upper-caste to suppress and bring down Bheema’s majorly lower-caste dominated legislature, which comes into conflict with the extreme left, the ‘Lal Salam’ brigade. 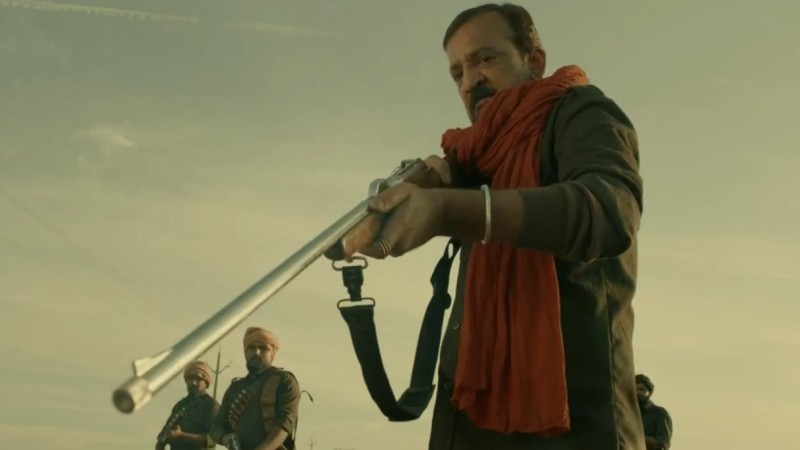 The whole game starts to be played from all quarters when Rani Bharti, staying true to her moral compass, starts exposing the scams that have long been harboured in the Animal Husbandry & Welfare department of the Bihar State government. What follows is a strategic warfare, which involves the use of brain and guns but in equal proportion.

On one end the upper-cast revolution wants to bring down the Rani-Bharti government, on the other, a few faithfuls remain with the ruling party to fight against corrupt officials, ministers, and those plotting the CM’s downfall.

The Crux of Maharani

If you’ve seen the trailer it might look like a story out of Lalu Prasad Yadav’s life, about how he encouraged Rabri Devi’s entry into politics and anchored the party despite being marred from a series of controversies. The plot of Maharani, may be iconically written, is still solid and packs a punch. 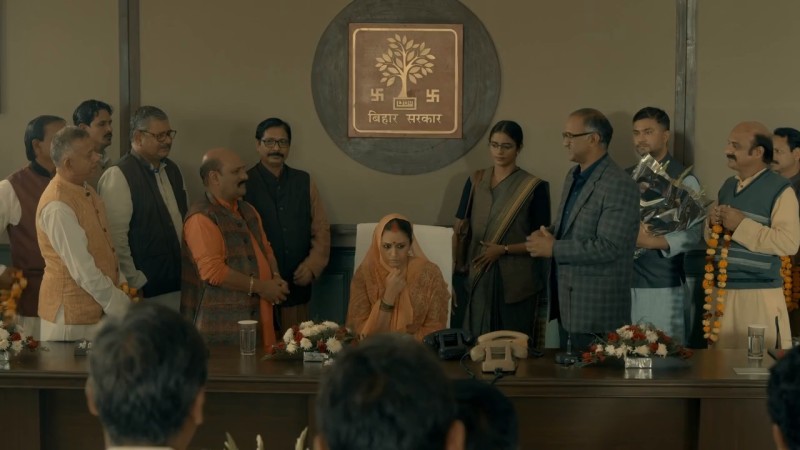 We will discuss what works and what doesn’t without trying to reveal a lot (you must watch it if you haven’t. 100% recommend) but for now let’s begin by focusing on the overall theme of the show, which is fair to say quite political and quite dramatic.

Based in a Bihar (from 1995 to 1999), the show captures the growing landscape of Bihar’s political ambitions that is quite strongly linked with its belt of right and left wing extreme ideologists. The scene, as elsewhere in India, is a complete mess with political rivalry, corruption, agenda-based portfolios, and other such evils dominating the state’s social fabric. 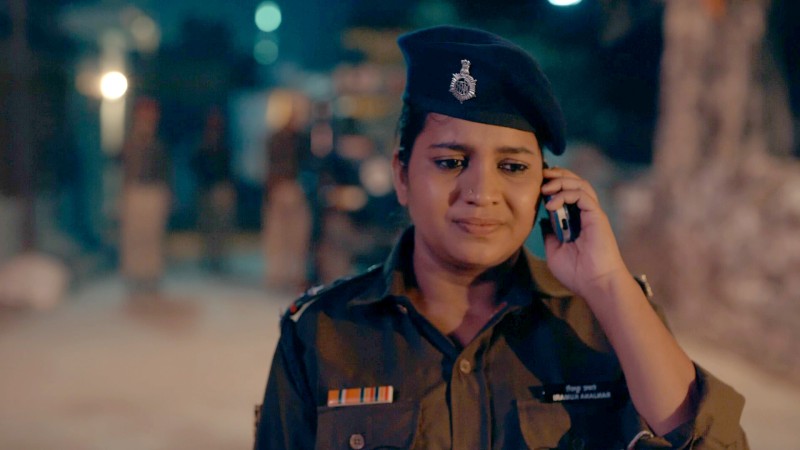 It is not just polity, which makes it shambolic for the common man of Bihar. The extreme casteism, which was the case back then, is a worry for any flourishing thought or ideology.

The Savarna kind, appeased by a ruling party that is majorly formed by lower-caste candidates, is on a rampant mission to eliminate those from the lower-caste, and the portrayal of this painful era – of Bihar – is central to the show’s overall theme. 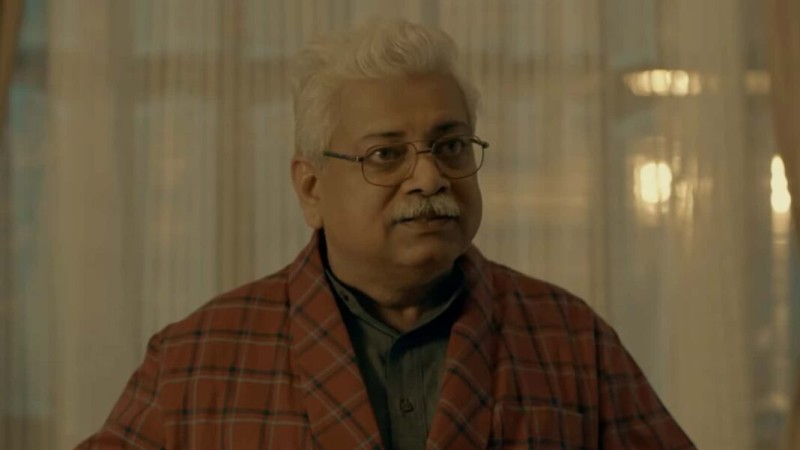 Leaders, both in the ruling and the opposition parties, have filthy connections far beyond their cabinets and assemblies. The Governor, who acts as a mediator, is shown exploiting his capacity and chair to the greatest extent, which again makes the plot intriguing and sensible at the same time.

Right from the complete curve of Rani Bharti’s character, from a rural homemaker to a cunning, yet wise, CM, to the efforts of her co-participants in this grand political drama, everything Mukesh Chabbaria attempted with the cast worked. 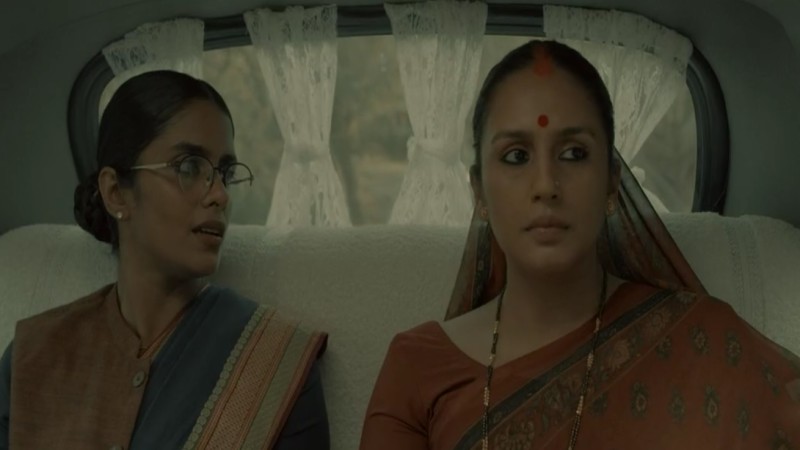 Directed by Karan Sharma, the show is a binge-worthy presentation that will leave you with a lot of questions in your mind. About power, about the absolute truth of our representatives, and maybe about caste – I hope so!

The 10-episode long Sony Liv original is one of the best performances you will see from a female protagonist. Huma Qureshi, right from her naive portrayal of a woman concerned about her cows and milk to the time she’s running riot in her own party, has been the epitome of the show’s success. She’s strong, she’s real, she’s just so good! 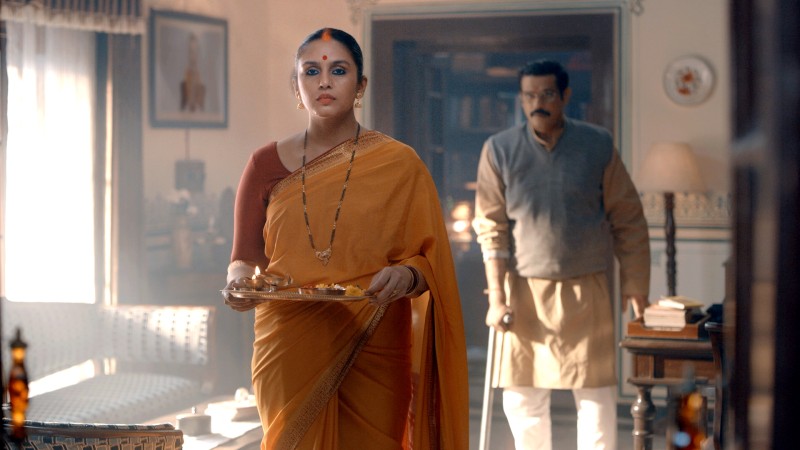 If acting classes were to make good actors, I’d suggest a lot of Bollywood actresses should take note of Huma’s portrayal of Rani Bharti.

For the Bollywood actors, I’d suggest you must watch Amit Sial. The, now, TV veteran has an impeccable dialogue delivery and his screen appearance will keep you hooked to what’s happening outside the Bharti household. He’s just too good to be ignored. 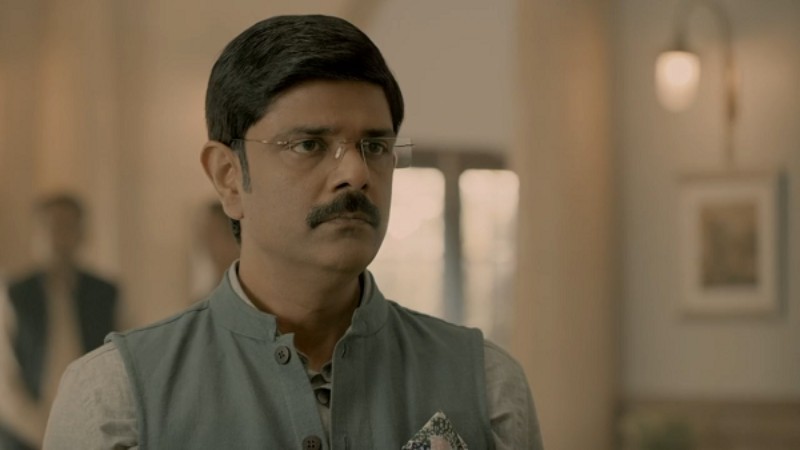 Critically acclaimed actor Inaamulhaq, who plays a sincere and outspoken Parvez Alam (a bureaucrat), is at his best and as a Bengali, I approve of his Bengali accent throughout the series. He fills in the gaps in the story, which sometimes can be a bit predictable.

The language, and dialogue delivery, itself has been the talking point of the show. The use of Northern-belt Hindi accent mixed with Bihari is brilliant and catchy for the average binge expert. 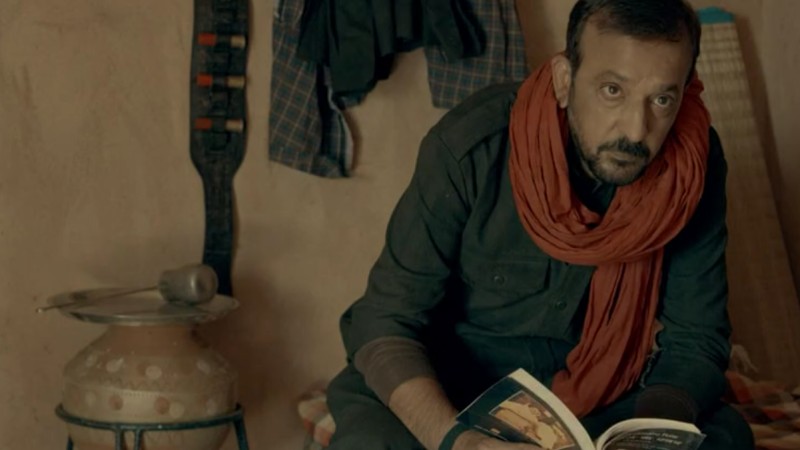 The writing is clinical, to the point, and does not exceed the requirements of the plot. The cinematography captures the rural and urban divide in the late 90s Bihar, and the extremist groups (whether the Veer Army under Mukhiya or Shankar Mehto’s Red Army) have been convincing enough to get the feel of the caste-based conflict.

What could’ve been better?

While I adored the show, the show’s ending cannot be called the best that we will ever see on an OTT platform. Whether there will be a season 2, we don’t know yet! But at times, you will just skip to the next scene knowing that you have not missed anything that’s consequential to the overall scheme of affairs. 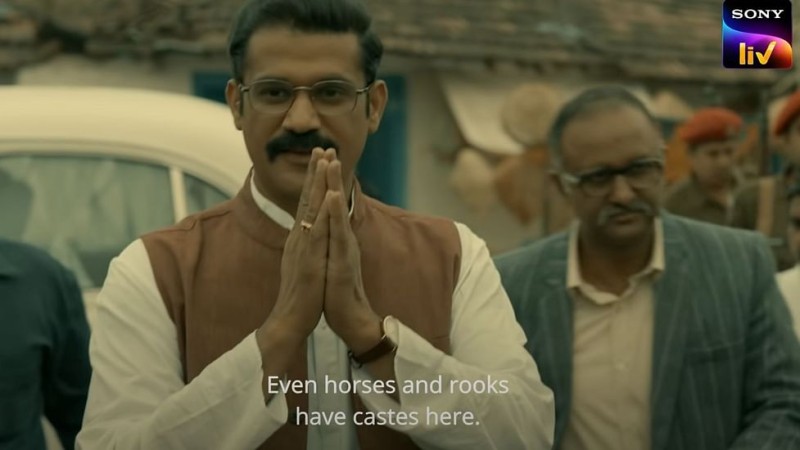 The appearance of the characters makes them convincing at times but the nature of the show makes you lose all that appetite within the next few minutes.

A bald minister, otherwise quite dominating in front of the ruling party, is being thrashed with slippers in an open hall. A bearded-baba appearing to be a conman (a cheaper lookalike of Sadhguru), and many such instances where you’ll figure out what’s cooking before they even discuss the itinerary.

The overall theme and the presentation is not new but has been presented in a different fabric. We see a political drama series, dragging the who’s who of Bihar under all types of lenses. There is the social fabric, showcasing the extent and indulgence of caste, then there is the political fabric, where power means everything. 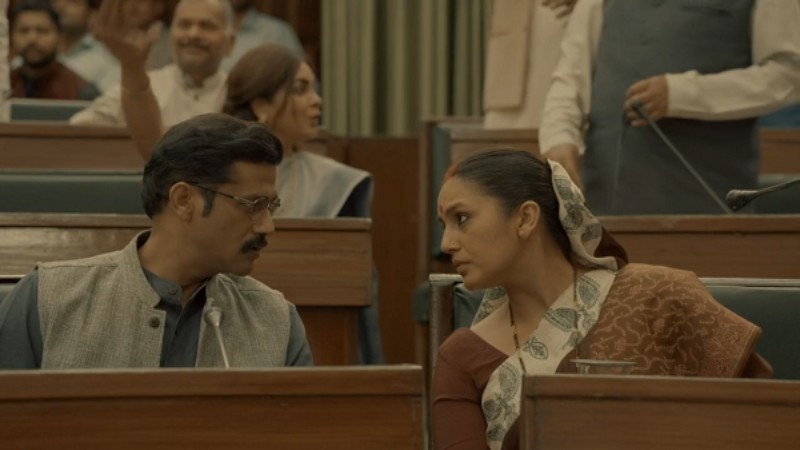 We also see the protagonist constantly dwindling between her family and what’s been thrown at her through her husband’s political offering.

For people out there, raging over shows like Four More Shots, this is the ideal show that’s driving on a feminine approach and latching on to the insecurities-vulnerabilities faced by women in a patriarchal world.

All the portrayals and roles have been effectively written with a purpose and the prevalent problems, which still exist today, have been brought out with some success. 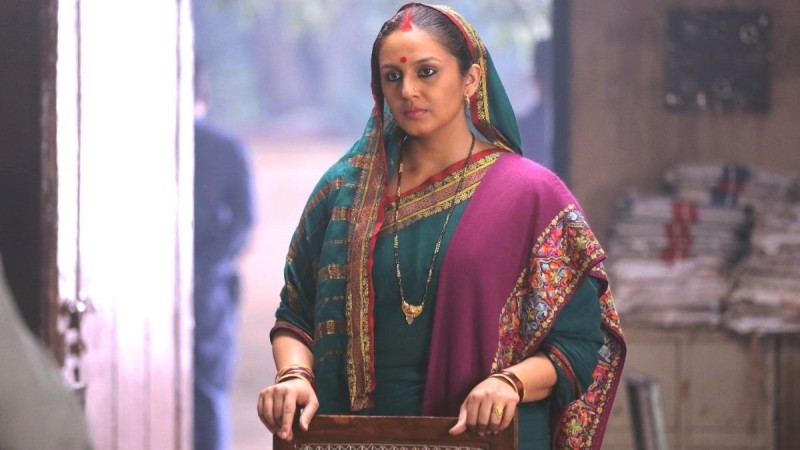 From a woman, worshipping her husband to be the most pure and pious, stepping out of his shadow, to the point where the underprivileged, lower-caste start seeing their land and wife as their own and not their master’s inheritance – the show takes you on a roller-coaster ride. One you must take!

To sum up, Maharani is a woman’s journey, taking her out of her household to the very centre of affairs in Bihar’s Legislative Assembly. It is Rani’s journey to become the Maharani of Bihar.

Quite iconic, very addictive. Go for it!

You can watch Maharani on Sony Liv, streaming now!