The battle for supremacy in 2019 is on but at a dear cost, of 'democracy'! 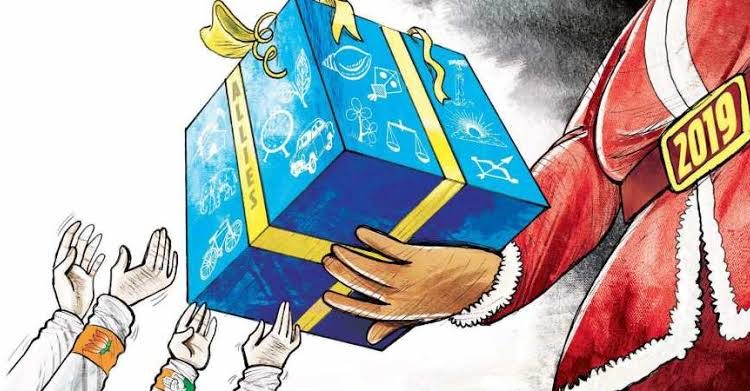 The elections are months away and you’ve already seen a lot to not see a bit more about how our country’s topmost elections can rattle the who’s who of Indian polity. If you’ve seen your local leaders and politicians behaving awkwardly – trust be you can blame the 2019 elections already.

The 2019 General Elections – The Lok Sabha election dates were declared by the Chief Election Commissioner Sunil Arora, giving out the list of dates and that 7 different phase of elections will take place from 11th April 2019 to 19th May 2019. The counting of votes will start on 23rd of May and the results will be announced on the same day.

The rallies have all been entertained, we’ve heard promises, actions, implementations of schemes and policies being towered in exchange of the people’s mandate but a few important players have started with their own ‘mind-games’, which do not fundamentally keep the elections democratic but in turn malign the very spirit of contesting fairly and with the people’s mandate in mind.

We’ve heard about the ‘Chowkidar hi Chor hai‘ campaign put into effect by Congress President Rahul Gandhi and his affiliates to point out the discrepancies in the ‘Modi govt.’ and how he failed to safeguard his own CRPF soldiers in the valley from being brutally butchered despite having the necessary intelligence. From losing 40+ men in Pulwama to letting people like Mehul Choksi and Nirav Modi flee India, the ‘Chowkidar Chor hai’ roar was heard across all social media platforms. 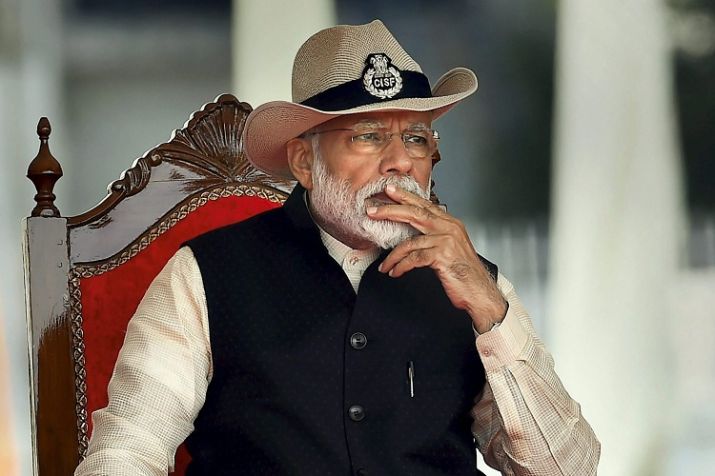 After Congress managed to take away a few states from under Narendra Modi’s nose, Rahul Gandhi was hailed for his successful campaigning and how he managed to change his ‘comic’ image to a ‘responsible’ leader’s imagery, after scathing through some success finally. But countering RaGa’s ‘Chowkidar hi Chor hai’ campaign, the PM at the right time, launched his own ‘Aap Bhi Chowkidar’ scheme. 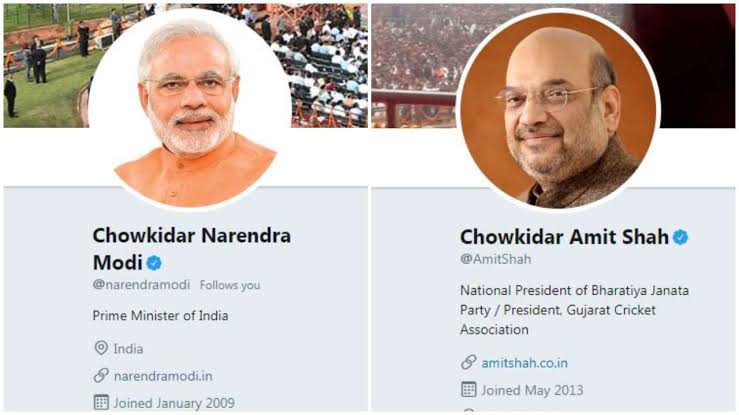 The campaign saw Twitter erupt crazy, with leaders like the Prime Minister himself, party-supremo Amit Shah, and some other senior leaders changing their twitter handle to ‘Chowkidar Narendra Modi’, ‘Chowkidar Amit Shah’, etc. The mockery and hypocrisy that went hand in hand after Modi declared himself as ‘public’s servant and not leader’ was not enough it seems, convincing the right-wingers to advocate their own case by becoming self-proclaimed ‘vigilantes’ or ‘Chowkidars’ of the country’s security and integrity.

Suddenly leaders and supporters of the ‘Saffron Party’ have unlocked levels of concerns towards their country but they think that’s possible to achieve by simply adding a prefix to their names on social media. Pages like the ‘Frustrated Indian‘ lauded the move with the page owners also edging their support by doing the same addition to their twitter handles. Now, the forever frustrated Atul Mishra is Chowkidar Atul Mishra, and that’s how the trend is being carried forward by stalwarts from the BJP IT Cell and from the RSS. 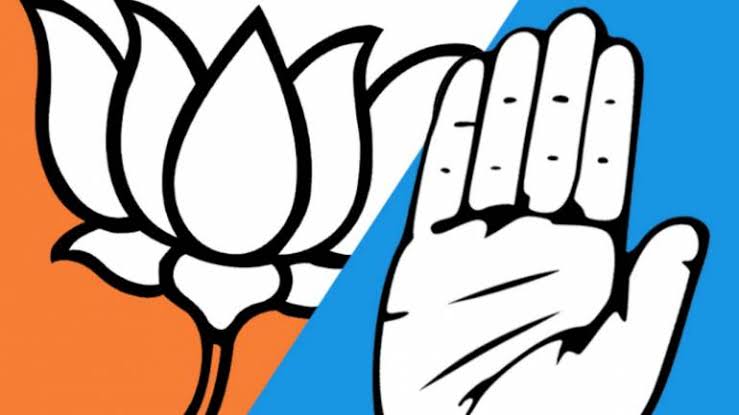 The party in power, the BJP, has its fair share of ups and downs in the past 4 and a half years if not the complete 5, given a change takes time to practice, profess and then implement further. But with filthy amount of money spent on advertisements and faulty PR, the space to save face is now less and quickly decreasing, as the time to give back to the public and answer them in detail looms in darkness.

Voting for a credible and honest servant of the country like Manohar Parikkar is a healthy exercise, but voting for a PM with 0 media interactions, key files getting stolen from the ministry and a niche for fascist agendas being spread through the ‘Godi Media’ (part of the media that is compromised), seems a bit odd if not maddening for the second successive time running. With the Goa CM now beyond the golden gates and the rainbow bridge, there is limited weaponry in the BJP arsenal to win the public-trust once again. But labeling the army’s heroics as their own, that agenda has also been devised to perfection, leaving very little for the people to not understand.

With the latest ‘Chowkidar’ shenanigan, I am not sure whether to convince my future children to become literate and learned or to simply devour their time trying to be ‘night watchmen’ or ‘Chowkidars’. If you can’t decide whom to vote for because everyone seems nice suddenly, remember to blame the 2019 elections already.

Here are some cartoons to make mess of something that’s already a mockery in itself – our political system! 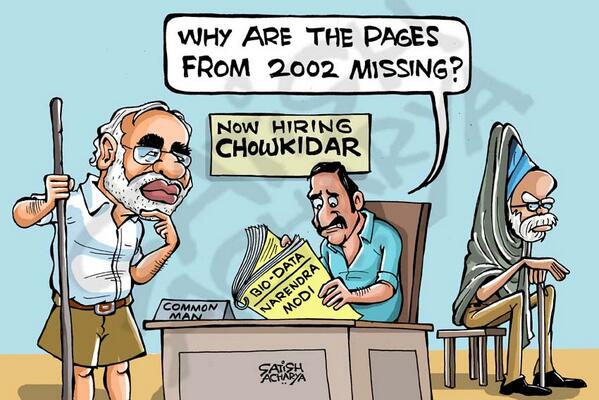 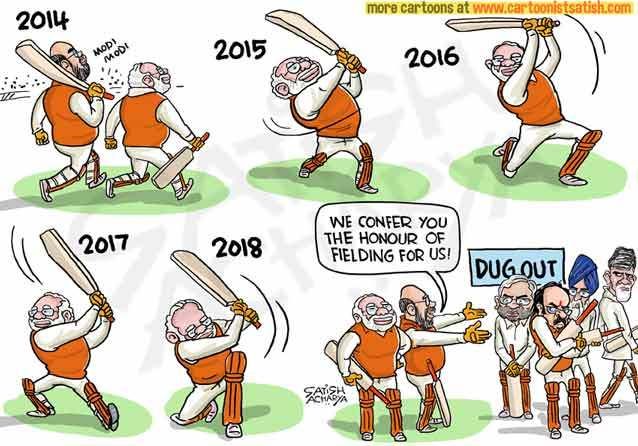 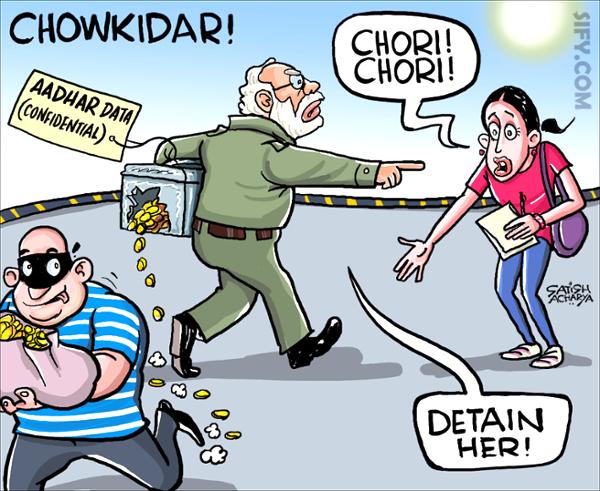