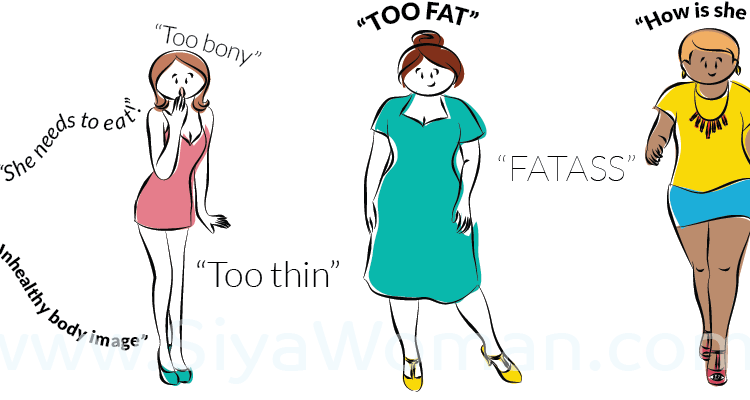 Did you ever observe why the images of women on billboards, newspaper, magazines, pamphlets etc always portrays women as slim, trim and skinny? This is from where the roots of body-shaming emerge in our society. We have been taught throughout our life via movies, advertisements or pictures on any print media that a perfect woman is one who is always fit, slim or skinny but not fat! Due to this reason, body-shaming or fat-shaming is increasing in our society to a greater extent.

Fat-shaming often called as Body-shaming is when people make negative comments by judging someones physical appearance. If someone is overweight and are not slim then they are frequently criticized and bullied which sometimes may lead to severe depression as well. Being fat or slightly overweight is considered as a guilt these days especially among the teenage girls. Our films are representing women in such ways which are indirectly brainwashing their minds and make them believe that the only way to get success in life is to look slim and trim. Few of them has even shown that if a girl is slightly overweight then they will not be able to get into a relationship. In short to have some guy in your life or to marry someone, women need to have a perfect hour glass figure. Having a gym membership is the current on going trend among our society despite the person’s own will to go gym and workout. They are mentally forced to do this because of society’s pressure.

In order to get rid of this mentality and to avoid such people whose only aim is to pull you down is to start taking things positively on an individual level. Everyone is flawed in one or other manner and this is true! You can easily find such women who have a perfect figure and looks required to act still they are not able to act well. On the other hand, there are such women who might not have slender figure still their acting skills are commendable and I am sure few names must have popped out in your mind after reading this. Start accepting the way that you are. Do not change your personality mentally as well as physically because of others. Afterall you are living for yourself ! Have your own definition of perfection. Take imperfections as blessings as they give you a way to improvise and have a better way of living. Do not spend hours working out in the gym just because you are told to do so. You must do it when you feel it within yourself. Although exercising on a daily basis is good only when it’s your need and not of others. When someone is in societal pressure, their mind does not work according to their own selves and they do everything as per the guidelines set by the society. You will meet such kind of people during every stage of life. Take it as a challenge and face them with the utmost confidence. Start loving yourself the most irrespective of the flaws which you might have. Know your worth, Ultimately who knows you better than yourself!

Inspired by pretty much everything happening around her,she is an aspiring content writer as well as a sleepyhead !

Empty Canals and Wells – VIDARBHA Prepares for the Summers, Yet Again

25 Top 90s Attractions – That Make Us Nostalgic Till Date