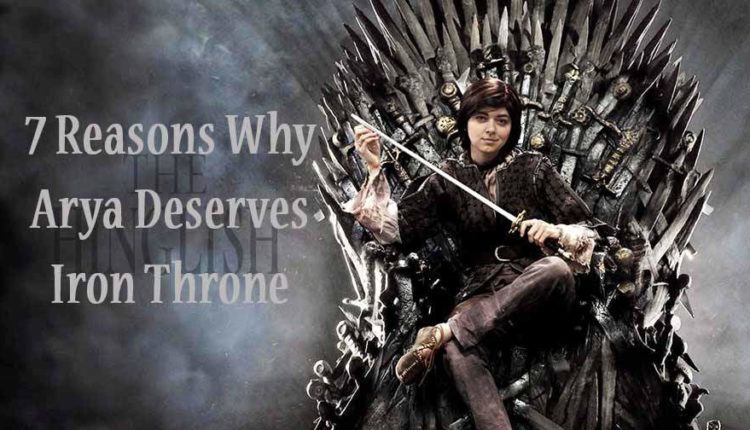 Arya Stark is one of the bravest characters in Game of Thrones and writers have done a good job describing her personality. Since the first episode of GOT, she has been questioning whatever she thinks is wrong. And I am damn sure that her story in this series is more thrilling than any other character, not even Jon Snow’s. And she proved it in the third episode of season 8 by killing the Night King. Now, fans have started suggesting that she will rule the Seven Kingdoms and here are 7 reasons why Arya Stark deserves the Iron Throne.

While everyone was expecting Jon Snow to fight with the Night King, Arya took the chance and killed him. Now, we know why Bran let her keep that Valyrian steel dagger. Anyway, by killing the Night King, she actually has become one of the strongest characters and deserves the Iron Throne to rule the Seven Kingdoms. Here is why:

1. She is Never Afraid

Arya is never afraid and always stands for what’s right. Remember, the first season when Joffrey was attacked by her direwolf? She always favors the right and opposes the wrong. So, it is the first of 7 Reasons Why Arya Stark Deserves the Iron Throne.

2. She is Brave and Never Leaves the Fight

Arya Stark has a list, if you remember and she has already killed most of them. She successfully took revenge for the Red Wedding and killed everyone. She is neither cruel nor coward and we can expect her not to leave her army in the battlefield and run back to her castle. This is one more of 7 Reasons Why Arya Stark Deserves the Iron Throne.

3. She Knows How to Survive

As said above her journey is more thrilling than any other character in this series, she has given perfect example of “how to survive” multiple times. Despite being the youngest girl, she survived killers, enemies, and strange places.

4. She is Eager to Learn More

Many-faced god is the best example of her enthusiastic nature. She did not only learn her lessons but killed the one who was far better than her. She has now power to become anyone because she is no one. Though, she chose to stay Arya Stark. I hope you remember that episode!

5. She has Immense Amount of Courage

If she wasn’t there, Bran would have been killed by now as Jon was busy saving his ass from the dead dragon. It certainly requires immense amount of courage to face “what’s dead may never die”. God, I love the dialogues. This is one more of 7 Reasons Why Arya Stark Deserves the Iron Throne.

So, what do you think? Will she sit on the Iron Throne and rule the Seven Kingdoms?

The Best TV Shows to Binge Watch Ever